A Call for Conversation & Action.

More than just words. These are skills to practice, every day.

Skills, which are difficult enough to employ among friends, in person. I think that our shared dilemma demands that we find ways to genuinely communicate. Now, even from a distance, as strangers, online. To post, share and comment with intention. Hear me out for a bit ... In 1955, in response to the arrest of Rosa Parks, the Montgomery Improvement Association (MIA) was newly formed.

Records from their meetings show an agenda that was deeply rooted in their Christian faith, as well as focused on their goal. To disturb the bus system of Montgomery, Alabama - with a SINGLE DAY boycott.

Around 90% of Montgomery's black community stayed off the buses, for that day. A SUCCESS. The MIA called another meeting.

"Well shit, we should keep this going, right?" ... somebody definitely said that. WHAT WERE THEIR CHALLENGES?

Early on, they formed a Transportation Committee.

Rosa Parks would briefly serve as dispatcher for their new citywide taxi operation. She wrote a ton of notes, with details on how she and her friends created and then operated this free to use transportation system, with up to 325 cars/drivers. Volunteer drivers worked rotating shifts, with 42 pick-up stations around the city, to service black Montgomery residents' travel needs ... for as long as it would take.

The MIA decided to have 6 full time, elected Officers. Dozens of part time volunteers. Dr. Martin Luther King Jr. was voted Chairman, and he would give progress reports during mass meetings at local churches. The thousands that showed up voted on ideas; they made decisions together. There was often food and music, to keep things fun. Disagreements.

ONLY TWO MONTHS into the protest (February 1956) - MIA's Treasurer, and well seasoned activist, Edgar Daniel Nixon resigns from the group, over leadership and decision making. In June, their Secretary, U.J. Fields, also resigns - and later publicly apologizes after accusing the MIA of misusing funds. Respectful disagreements about strategy and vision, were the norm.

"I shall not attempt to go into all the details of the things I dislike, ... whatever the reason for my resigning shall not effect my respect for the organization that is bigger than I or any of its members. I regret to have to make the decision but if it will help the organization, I am gald [sic] to make the sacrifice."

Money. The MIA would collect donations at meetings, from Montgomery's working-class black community. The money raised would pay for gas expenses, food, and general support, to alleviate hardship for the many people making sacrifices.

The racist white population in Montgomery resented this demonstration of autonomy and self determination. Many business owners retaliated by firing their black employees who dared participate. They spread false, confusing information. They intimidated activists, and offered weak solutions to end the boycott.

The black people of Montgomery, AL stood firm together for 382 STRAIGHT Days. They communicated, they planned, argued, prayed, danced, carpooled, donated, partied, resisted, walked, and supported each other until the Supreme Court eventually struck down Alabama's bus segregation laws. For context, the start of October 2020, will make just 275 days, this year. 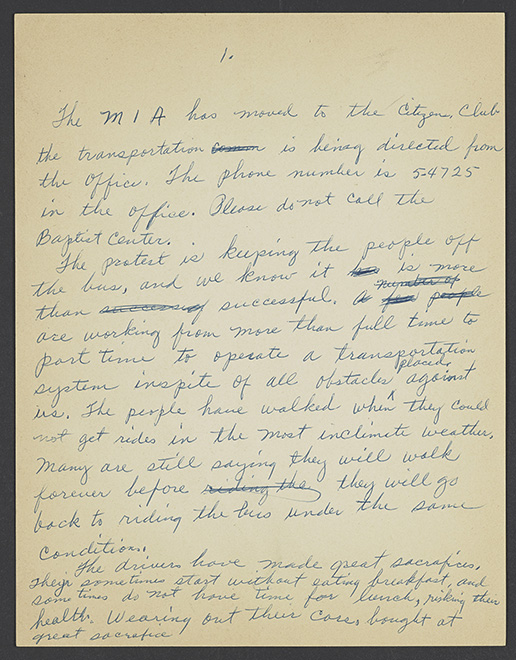 I share that glimpse into a complex and often skimmed over history, to say this! ...

When I post online, or create a new cartoon, or edit a new episode of my podcast, I do so with a desire to be in genuine communication with YOU.

I try to be aware of the power of my words, and my choices.

It is the same awesome power that YOU have.

We are all activists, in this way, whether we like it or not.

I think we should own this truth, and become intentional about how we engage with each other. I'm asking for justice minded people to TURN AWAY from the noise of this toxic, openly racist president, and his strident supporters. We've had enough shock and confusion. Let's TURN TOWARD EACH OTHER.

Discuss logistics, and vision, build community and support each other's resiliency and morale. There are minds grappling, and people struggling, and kids watching.

There is a better world for us to construct. If you're reading this, I appreciate you, and I hope you are well. Honesty and Empathy. -Billy

I Animated a Logo for Bottoms Up.